END_OF_DOCUMENT_TOKEN_TO_BE_REPLACED

In what the New York Times somewhat hyperbolically calls a "clash," US Border Patrol vessels have over the past two weeks stopped at least 10 Canadian fishing boats near Machias Seal Island between Maine and New Brunswick. Canada has responded by beefing up its Coast Guard patrols in what is being termed a "disputed gray zone" between the two countries' territories. "There is no illegal immigration going on there," a bewildered Canadian fisherman told the Times. "It seems silly." Most observers see it as related to the current bitter trade dispute between Washington and Ottawa. The Canadian Broadcasting Corporation says the US Border Patrol has stopped over 20 Canadian vessels so far this year in "contested waters" in the Bay of Fundy, and "has no intention of stopping." The so-called Grey Zone consists of some 700 square kilometers of lucrative lobster waters where the Bay of Fundy meets the Gulf of Maine, although few actually live in it. Machias Seal Island is a migratory bird sanctuary maintained by the government of Canada, but is otherwise uninhabited.

A report on Canada's Global News provides some historical background. In 1621, the British Crown granted the lands that make up what is now Nova Scotia, New Brunswick, Prince Edward Island and the Gaspe Peninsula to the Scotsman Sir William Alexander, Earl of Stirling. However, those territories had already been claimed by the French as the colony of Acadia. This dispute was resolved in the 1713 Treaty of Utrecht, when the French handed over the territories that made up Acadia to the British. (The Acadians, descendants of French settlers, would notoriously be expelled in 1755, at the start of the French & Indian War.) The current conflict dates to the 1783 Treaty of Paris that ended the Revolutionary War between Britain and the nascent United States.

The 1783 treaty stated that islands within what's now reckoned as roughly 112 kilometers ("20 leagues") from the shore of Maine would belong to the United States. But that text excluded "such islands as now are, or hereafter have been within the limits of the said province of Nova Scotia." The Canadian government maintains that those terms included Machias Seal Island and that therefore it is Canadian territory, pursuant to the 1621 land grant. The US refused to recognize this. The dispute erupted again in the War of 1812.

As Atlas Obscura notes, in 1832 Canada built a lighthouse on the island and installed a small Coast Guard force for "sovereignty purposes." Both countries refused to include the island in a case brought before the International Court of Justice in 1979 to resolve other border disputes along the Gulf of Maine. The 1984 ruling awarded some two thirds of the Gulf to the US, but excluded the Grey Zone.

As The Economist notes, the US has a handful of other "managed maritime disputes" with Canada, including fishing waters at Dixon Entrance between Alaska and British Columbia, and areas of the petroleum-rich Beaufort Sea near the Arctic Ocean. So plenty of potential for more of this "silliness."

As usual in such disputes, the rights of the region's indigenous people are neatly ignored by both sides. The shores and islands where the Bay of Fundy meets the Gulf of Maine are the homeland of the Passamaquoddy nation, part of the Wabanaki Confederacy, whose territory is now divided between the US and Canada. The Passamaquoddy have tribal governments at Indian Township and Sipayik (Pleasant Point) in Maine.

After the 1723-6 Dummer's War war with Britain, Dummer's Treaty of 1727 for the first time formally recognzied Wabanaki territorial rights. The Confederacy, dormant since Canadian independence, is now attempting to reconstitute itself. MaineBiz website noted in March that the Passamaquoddy are currently attempting to negotiate with Ottawa to establish their fishing rights in Passamaquoddy Bay, an inlet of the Bay of Fundy. 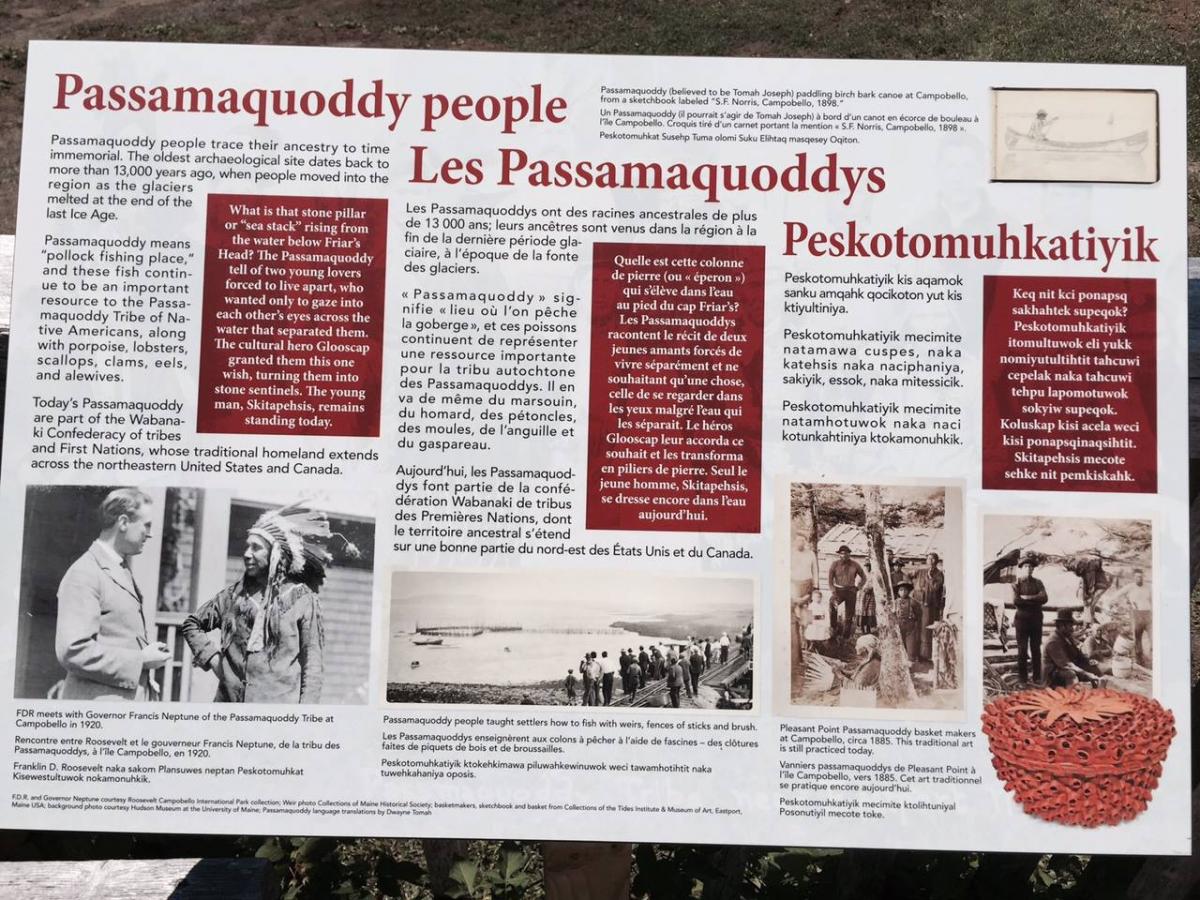 At Campobello Island, Franklin D. Roosevelt's summer home in New Brunswick, now jointly administered as an international park by the US and Canada, a display about the local Passamaquoddy Indians is in three languages: English, French and transliterated Passamaquoddy. Passamaquoddy chief Tomah Jospeh was a childhood friend of FDR. Photo in bottom left of display shows adult FDR shaking hands with Joseph's sucessor, Chief William Neptune, pictured wearing a Plains Indian war bonnet (a bit of a culturally inappropriate cliché for the camera). Photo by CounterVortex.

A large fire destroyed a lobster pound in Middle West Pubnico, Nova Scotia, on Oct. 17, amid rising tensions over a treaty right to a self-regulated Indigenous fishery in the province. Mike Sack, chief of Sipekne'katik First Nation, said the facility was owned "by a friend and ally," adding that one of their community members was barricaded in and his catch destroyed there last week.

"I am once again calling on Prime Minister Trudeau and the RCMP to dedicate the necessary resources to this region to protect everyone," Sack said in a statement. "I am extremely concerned that someone is going to get hurt or worse."

The incident follows violent clashes and damage to lobster pounds in the province. Non-Indigenous protesters oppose the band's decision to start a commercial lobster fishing business that has operated outside the federally regulated lobster season since mid-September.

But Sack argues Indigenous people in Atlantic Canada and Quebec have a treaty right to fish for a moderate livelihood where and when they want, based on a 1999 Supreme Court of Canada decision that cites treaties signed by the Crown in the 1700s. Critics, however, cite a clarification issued four months after the 1999 ruling, stating the Mi'kmaq treaty rights would be subject to federal regulations to ensure fish conservation. (Canadian Press)

A federal judge in the US District Court for the District of Alaska ruled that two companies, Kloosterboer International Forwarding and Alaska Reefer Management, can continue shipping frozen fish from Canada to the eastern US. Almost 26 million pounds of fish has been stranded in Canada after US Customs & Border Protection issued a $350 million penalty to companies shipping seafood out of Dutch Harbor in Alaska.

US Customs alleged violations of the Jones Act, also known as the Merchant Marine Act of 1920, a federal statute regulating maritime commerce in the US. The Jones Act requires goods shipped between US ports to be built, owned, and operated by US citizens. Customs claimed the companies used a secret port in New Brunswick since 2012 in an attempt to exploit a loophole in the act.

The alleged loophole involves travel through Canada. The companies use foreign-flagged ships, not US-made vessels, to transport their goods across the US. The companies claimed, however, that they meet a Jones Act exemption given that the seafood on board briefly travels by rail through a part of Canada.

The US Justice Department argued that the journey through Canada along 30 miles of established railway was unlawful. Once the penalty was issued, shipping companies were forced to close factories and halt shipments. The seafood was unable to make its way to the US eastern seaboard, and as a result, the entire supply chain was disrupted. Following the decision on Oct. 10, shipping can resume. The companies consider this a temporary victory after a drawn-out legal battle. (Jurist)