END_OF_DOCUMENT_TOKEN_TO_BE_REPLACED

An Oct. 23 AFP story relates how Syria's Kurds are restoring ancient names to "Arabized" towns in the country's north (where the regime has collapsed an a Kurdish-led autonomous administration holds power). Writer Delil Souleiman reports from a small town in the "official" governorate of Hasakeh known for decades as Shajra but now once again by the older Kurdish name of Joldara. Said one elderly resident: "Joldara in Kurdish means a plain covered in trees. This was the name of the village before it was Arabized by the Syrian government in 1962 and changed to Shajra," which means tree in Arabic. Joldara is one of hundreds such towns where new road-signs have been raised by the autonomous administration, with the Kurdish names in both Latin and Arabic script.

Local researcher Zohrab Qado (with the autonomous authorities of Jazira canton) says the Arabization of town and village names accelerated when Syria's Baathist regime came to power in the 1960s, but started the previous decade under the short-lived United Arab Republic of Syria and Egypt. According to Qado, Syria's government even distributed land around Kurdish villages to Arab farmers coming from Raqqa governorate in a bid to transform the demographic composition of the northern region.

With this comes a very sobering piece by Nick Danforth in Foreign Policy on the revanchist Ottoman nostalgia fetish now evidenced in Turkey. This has ominously grown in recent weeks amid the conflict between Ankara and Baghdad over Turkish participation in the offensive on Mosul—and Turkey's  bombing Kurdish forces in Syria for the first time.

On two separate occasions, President Recep Tayyip Erdogan criticized the Treaty of Lausanne, which created the borders of modern Turkey, for leaving the country too small. He spoke of the country's interest in the fate of Turkish minorities living beyond these borders, as well as its historic claims to the Iraqi city of Mosul, near which Turkey has a small military base. And, alongside news of Turkish jets bombing Kurdish forces in Syria and engaging in mock dogfights with Greek planes over the Aegean Sea, Turkey's pro-government media have shown a newfound interest in a series of imprecise, even crudely drawn, maps of Turkey with new and improved borders.

These maps reveal the "buffer zone" Turkey is now establishing in northern Syria to be just part of a far greater territorial ambition—in Iraq as well as Syria. Mosul and Kirkuk as well as Aleppo fall within the expanded borders. The aim is clearly to bring virtually all of historic Kurdistan under Turkish rule, so as to crush Kurdish national aspirations anywhere in the region. 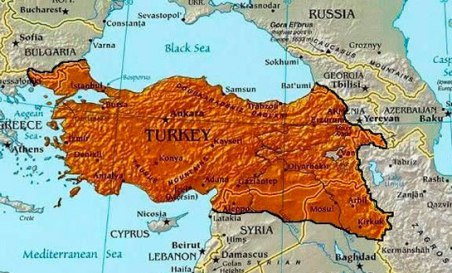 Of course, even this falls far short of the domain once covered by the Ottoman empire. Is there a political logic here? Danforth explains:

These maps purport to show the borders laid out in Turkey's National Pact, a document Erdogan recently suggested the prime minister of Iraq should read to understand his country's interest in Mosul. Signed in 1920, after the Ottoman Empire's defeat in World War I, the National Pact identified those parts of the empire that the government was prepared to fight for. Specifically, it claimed those territories that were still held by the Ottoman army in October 1918 when Constantinople signed an armistice with the allied powers. On Turkey’s southern border, this line ran from north of Aleppo in what is now Syria to Kirkuk in what is now Iraq...

Erdogan, by contrast, has given voice to an alternative narrative in which Ataturk’s willingness in the Treaty of Lausanne to abandon territories such as Mosul and the now-Greek islands in the Aegean was not an act of eminent pragmatism but rather a betrayal. The suggestion, against all evidence, is that better statesmen, or perhaps a more patriotic one, could have gotten more.

We've already noted the tomb of Suleyman Shah, a patch of ground within (now Kurdish-controlled) northern Syria that Turkey actually claims as its sovereign territory. This now appears to be but the anchor for a far greater irredentist claim. The bitter irony is that Turkey is going in this ugly direction as its propaganda accuses the revolutionary Kurds of harboring similar ambitions to create a state across current national boundaries—even as the Kurdish movement has renounced statist aims in favor of a model of local autonomy.