END_OF_DOCUMENT_TOKEN_TO_BE_REPLACED

A sadly hilarious story in the Washington Post today headlines: "The British are frantically Googling what the EU is, hours after voting to leave it." A majority of Great Britain's voting public voted for the "Brexit" yesterday, apparently without even understanding exactly what it is they were voting to leave, and now may now be feeling some morning-after buyer's remorse. Prime Minister David Cameron, who cynically called the vote in a play to the populist right even as he urged rejecting the exit from the European Union, will now step down—and may go down in history as the man who oversaw the beginning of the dissolution of the United Kingdom, two centuries and change after its creation. Most obviously, Scotland overwhelmingly voted to stay in the EU, and the Brexit is now reviving calls for its secession from the UK. Scottish First Minister Nicola Sturgeon has already announced that it is "democratically unacceptable" that Scotland will be taken out of the EU against its will, and that a second independence referendum is "highly likely." (The Independent)

Ahead of Scotland's elections last month, the Scottish National Party (SNP) stated in their platform: "We believe that the Scottish parliament should have the right to hold another referendum if there is clear and sustained evidence that independence has become the preferred option of a majority of the Scottish people—or if there is a significant and material change in the circumstances that prevailed in 2014, such as Scotland being taken out of the EU against our will." (Newsweek)

But there have also been calls for Northern Ireland to bolt the UK and unite with Ireland. In the wake of the Brexit vote, Northern Ireland's Deputy First Minister Martin McGuinness has called for a new "border poll" on a united Ireland. (The Independent)

This cute cartoon is making the rounds on Facebook... 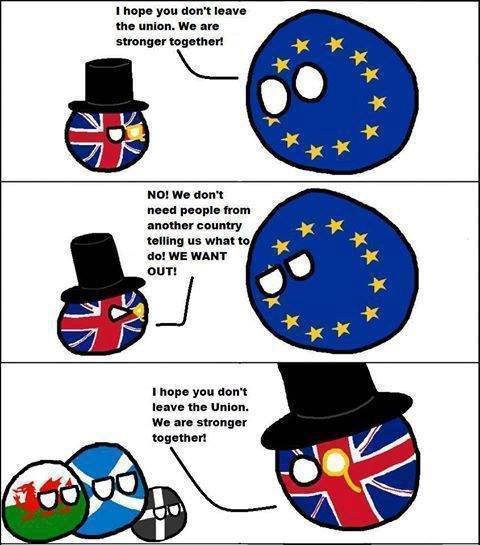 The three small flags at the bottom are actually (left to right) Wales, Scotland and Cornwall. Wales and Cornwall, in fact, voted in favor of the Brexit, mostly—but may also be having some belated second thoughts. Another sadly amusing headline in The Independent reads: "Cornwall votes for Brexit and then pleads to keep EU funding." The Cornish council has actually issued a plea for "protection" following the vote, afraid of losing the millions of pounds in subsidies from the EU it receives each year as one of Europe's poorer regions.

But it gets better still. There is even talk of London itself seceding from Britain and remaining within the EU as a free city-state. The seemingly "fanciful" idea is openly broached by the BBC News, which quotes a Prof. Tony Travers of the London School of Economics. He says that the Scottish independence referendum in 2014 contributed to a wave of "London nationalism." An opinion poll at the time showed a full 20% of Londoners backing the idea of breaking away from the rest of the UK. An online petition has already been launched to "declare London independent from the UK and apply to join the EU."

London and environs constitute the most significant part of England that voted overwhelmingly to stay in the EU, as the "overall result" map at this BBC page shows. Interestingly, this more or less reflects the juxtaposition of forces at the start of the English Civil War of the 1640s, when the conservative royalist "Cavaliers" controlled the back-country of the north and west, while the modernist "Roundheads," loyal to Parliament, controlled the more urbanized southeast around London... The more things change, eh?

Making the cultural divide clear, London Mayor Sadiq Khan—the city's first-ever Muslim mandatary—issued a message addressed to immigrants, saying: "You are very welcome here... As a city, we are grateful for the enormous contribution you make, and that will not change as a result of this referendum." (FC)

But the left this time around was actually divided. The Labour Party officially opposed the Brexit, but many of the party's rank-and-file apparently voted for it. Party leader Jeremy Corbyn may now face a no-confidence vote for his "half-hearted" effort against the Brexit. (FT) The oft-problematic Tariq Ali also threw his support behind the Brexit. (TeleSur) He was a leading voice calling for a "Lexit" (a left-wing exit).

There is indeed a left-wing case against the EU—as the debacle in Greece all too clearly demonstrates. But Britain is not in the eurozone and did not have austerity imposed by Brussels. (Ironically, the ruling Tories have been imposing their own austerity—and it is only likely to get worse in the economic chaos of the coming Great Divorce!) The Brexit initiative was not principally about economic grievances—it was about xenophobia. It was an initiative of the right, and that is who stands to gain from its victory.

Juan Cole's Informed Comment blog asks: "Did Trump-Style Islamophobia break up the European Union?" He cites a recent poll that "showed a surge in concern about immigration, with only 15% of respondents saying it was their number one concern in the Brexit issue in early April, which grew to 20% by late May. Arguably, that shift was the margin of victory for the Leave side."

As for El Pendejo himself,  Vox notes that he was actually in Scotland for the vote—there to oversee the opening of a new golf course. He triumphantly tweeted: "Just arrived in Scotland. Place is going wild over the vote. They took their country back, just like we will take America back. No games!" Angry Scots have been busy tweeting back at him, taking him to task for his apparent ignorance on how Scotland actually voted.

The hard-right UK Independence Party (UKIP) is the real political beneficiary of the Brexit. The horrific assassination of pro-European MP Jo Cox in the prelude to the vote—with the suspect entering his name in court as "Death to traitors, freedom for Britain"—makes clear the nature of the backlash on the nationalist right. (The Guardian) It's even been broached that leading pro-Brexit loudmouth, London's Tory ex-mayor Boris Johnson, could be the next prime minister. (The Telegraph) The xenophobes could be about to take state power both sides of the proverbial pond.

It is painful to see segments of the "left" playing into their hands. The (reliably reactionary) Counterpunch headlines: "The Left and the EU: Why Cling to This Reactionary Institution?" It makes the obvious case for an anti-Europe populism, but contains not a word about how the Brexit has been a victory for Britain's xenophobe right, which heartens their ilk on the Continent and here in the States as well. That overwhelming context is utterly ignored—but of course, we get the usual parroting of the Putin position on Ukraine. (Hopefully, we don't have to belabor the irony of the word "reactionary" in the headline.)

With breakdown of the EU threatening to presage break-up of the UK itself, and Britain's left in disarray (just after its startling victory in the leadership of Labour), some clear progressive thinking is urgently needed here. An initiative to leave either Europe or Britain isn't either good or bad in itself—it depends on the politics that animate it. And the politics behind the Brexit were very bad. The conversation that needs to be had on the left now is whether to abandon Britain, or to fight for its soul. Maybe time to brush up your Leopold Kohr...