END_OF_DOCUMENT_TOKEN_TO_BE_REPLACED

The partial "ceasefire" in Syria definitively ended April 28 when a strike by regime or Russian warplanes destroyed a hospital in Aleppo, killing scores, including several children and two doctors—one, the city's last pediatrician. (BBC News, The Guardian, Daily Mail) The UN High Commissioner for Human Rights expressed grave concern over a "monstrous disregard for civilian lives," and urged all sides in the Syrian conflict to refrain from targeting civilians. (Jurist) How much time did Democracy Now devote to this that day? A total of two lines of regurgitated wire copy that was not even featured on the front page of the program's website. (There was a follow-up blurb on Aleppo, of similar harsh brevity, on May 2.)

Democracy Now producer Amy Goodman is being petitioned by Syrian activists to actually invite some Syrians on to her show. Especially suggested are Leila al-Shami and Robin Yassin-Kassab, authors of Burning Country: Syrians in Revolution and War, newly released from Pluto Press. Goodman has yet to respond. The petition notes that just three days before the Aleppo carnage, Democracy Now devoted nearly a full program to yet another soft Goodman interview with Seymour Hersh, a vigorous apologist for the Assad regime. In the interview he applauded Russia's intervention in Syria and called it "effective." The petition notes that Russia has killed hundreds of Syrian civilians, and bombed multiple hospitals.

Getting their "information" (if you will) from such skewed sources as Democracy Now and the even more egregious Counterpunch, it is not surprising that most "progressives" (sic) in the US have such reactionary and deluded views on Syria.

Last year, Sam Charles Hamad on Daily Beast called out this silent (at best) complicity: "Russia Bombs Hospitals. Lefties Shrug." He especially took to task the grievous Glenn Greenwald, who in a recent article "could barely contain the excitement of having caught the US out" in having condemned Russia for civilian casualties in Syria and now itself culpable in the Kunduz hospital attack in Afghanistan. Wrote Hamad: "There is genuine hypocrisy there, but the difference is that nowhere in any of Greenwald's output will you find actual recognition of the victims of the Russian strikes and the circumstances that led to their deaths. The mention of Syrian casualties of Russian strikes by Greenwald features only as a means to point out US hypocrisy."

Greenwald responded in his vehicle the Intercept and on Twitter: "Why is Sam Charles Hamad, the Daily Beast's Russia Critic, Silent About So Many Hideous Abuses?" Striking randomly, he blasted Hamad for not having written about police brutality in Peru. Greenwald boasted that he, in contrast to Hamad, chooses "to focus on the bad acts of our own government and its allies."

This is a perfectly bogus response. We've been through this before: Yes, we have a greater responsibility to protest atrocities carried out with our tax-dollars and in our name. But this logic is only valid in assigning a priority to what we protest. It is today interpreted to mean that we must maintain hermetic silence on any atrocities not committed by the US and its most obvious client states such as Israel (or Peru). Worse, it has warped into an analytical double standard whereby any such atrocities must be forgiven and justified. Of course, this is completely counter-productive. By loaning active propaganda to the atrocities of Assad or Putin, we lose all moral credibility to hold US imperialism to account.

And if Greenwald's propaganda service to Russian aggression and Assad mass-murder is perhaps less active than Hersh's worst, it is only more insidious. By only invoking the Russian atrocities to call out American hypocrisy in condemning them, he is exploiting the Syrian and Afghan victims alike for propaganda purposes. As Paul Woodward pointed out in his War in Context blog, "Greenwald's primary interest is in using these war crimes as an opportunity to take shots at the US government." This merely contributes to the objectification of victims, which is the logic of criminal attacks on civilians. It is also implicitly letting Russia off the hook: condemning those who condemn the Russian atrocities without actually condemning the atrocities (or noting that others untainted by such hypocrisy, such as Doctors Without Borders and Amnesty International, have done so).

Oh, and are you going to try to call out World War 4 Report for failing to cover police brutality in Peru, Greenwald? That would be a very bad idea.

Regime apologists similarly got to gloat yesterday, when rebel forces in Aleppo hit a hospital in a government-held part of the city with rockets, killing at least three (among some 20 killed in the area). An organ of state propaganda popular among "progressives," TeleSur, headlines: "US-Backed Fighters in Syria Bomb Yet Another Hospital in Aleppo." This is dishonest of two counts. First, just from the headlines you would think it was the rebels that had bombed the previously struck hospitals. You certainly wouldn't know that Assad and Russia have been deliberately targeting hospitals in their air-raids for months. Second, neither this account nor more mainstream ones (e.g. Reuters) make clear which rebel faction was responsible for the attack—so the phrase "US-backed fighters" is premature at best. We have questioned how much US aid has in fact actually reached the FSA—and "rebel" factions such as Nusra Front are being bombed rather than armed by Washington.

The notion of a US conspiracy to destabilize Assad is an increasingly transparent fiction. At least since the rise of ISIS, Washington has in fact been tilting to Assad in the Syrian war. We noted last year reports that the US is actually constraining the rebel forces from fighting Assad, insisting they fight only ISIS. More such reports now emerge. The pro-opposition Syrian Mirror this week quotes FSA commanders saying that the US-led Military Operations Center, based in Jordan, called a special meeting to "set political conditions for support to rebels." These include: "1. Destruction of military and security structures in Syria is a 'red line'; 2. President Assad can be removed but the regime structure will remain; 3. The Syrian opposition must not demand a war crimes trial for Assad or 250 regime members who will escort him out of the country..." According to one commander: "The representatives of the MOC made it clear that opposition factions must prepare themselves to join the ranks of the Syrian Army" to fight Nusra Front and similar jihadist factions. (EA World)

So the notion that we must rally around Assad because the US opposes him (as stupid and barbaric as that would be) is predicated on a fiction.

The "left" in the United States is squarely on the wrong side in Syria, even as the Assad regime has now escalated to genocide in its war against the Syrian people. The regime is accused by the UN of a systematic "extermination" of the civil population in areas under his control. With luck, Assad may yet wind up before a court in The Hague. Last year the toll in the Syrian war surpassed a quarter million, and may now be as high as 400,000—with the regime responsible for by far the greatest share of civilian deaths in recent years as it increasingly resorts to indiscriminate aerial terror.

In the 1930s, the American could left could claim solidarity with those who stood up to the authors of the Guernica terror in Spain. Today it stands on the side of fascism and genocide in Syria.

We are heartened to receive word of a Revive the Peace Movement Network (RPM), bringing together CodePink, Campaign for Peace and Democracy, Middle East North Africa Solidarity Network and other such organizations, with a statement that includes this refreshing passage:

We resolutely oppose the wars of the U.S., its allies and clients, including Egypt and Saudi Arabia, and U.S. support for repressive regimes such as Honduras and Bahrain. We call for an end to U.S. support for Israel and for justice for Palestinians, in all of historic Palestine and in their places of refuge.

We also recognize that there are other oppressors in the world, from ISIS to Russia, from Iran to China, from North Korea to the Assad regime. We won’t hesitate to oppose their wars, interventions and cruelties.

Of course there is a contradiction here from which they take the easy way out by not recognizing: much of the civil opposition in Syria is actively demanding a no-fly zone be imposed on the Assad regime in the face of its relentless aerial terror. Do we also oppose this as a "war of the US"? Slightly dishonest to just ignore the question. Still, we'll take what we can get. This is a sign of principle re-emerging, at long last, on the anti-war left in America. Of course, they are playing catch-up to the reactionary, pro-dictatorship United National Anti-War Coalition (UNAC), the most recent effort to revive the moribund "anti-war" forces...

Now we would just like to know: Where are War Resisters League, United for Peace and Justice, US Labor Against the War? Shouldn't you be on board here, folks?

Democracy Now today features a segment with the following very refreshing title: "Amid Ongoing Conflict in Syria, Activists Work to Keep Alive Revolutionary Spirit of 2011 Uprising." Interviewed is Yasser Munif of the Global Campaign of Solidarity with the Syrian Revolution, whose work we have noted here and here. He speaks about the resurgence of protest and civil activism in Syria since the recent lull in the fighting. Of course, we at World War 4 Report have been reporting on this for weeks now, so all we can say is better late than never. Still, we must give credit where it is due. It seems that the peitioning of Amy Goodman paid off. This is a good start, and we hope she will continue in this direction.

Alas, the dictator-shilling comments on the post from Amy's followers are as disgusting as they are predictable. That's what you get after cultivating such an ugly and wilfully ignorant audience with repeated marshmallow-soft Seymour Hersh interviews, Amy. Maybe you are serious about getting better now. We hope so.

Note: Yes, Goodman did feature Syrian activists before—in the immediate aftermath of the Ghouta chemical attack, when US intervention against Assad was abortively threatened. She framed the central topic as US intervention—not the revolution against Assad. And she has certainly featured Seymour Hersh (in typically non-adversarial interviews) far more often than she has featured Syrian activists. 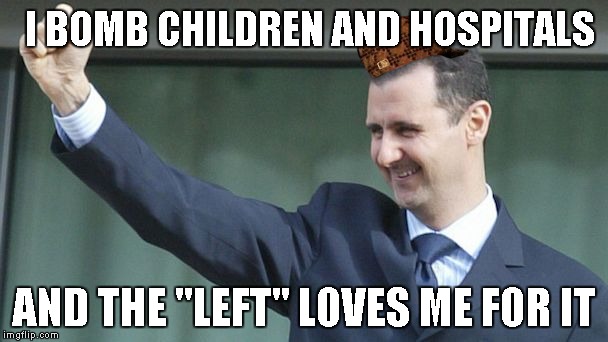