END_OF_DOCUMENT_TOKEN_TO_BE_REPLACED

Chem-armed ISIS being funded through US?

Well, probably not, but maybe we can get some hits by throwing cold water on the inflammatory claims. Russia Today of course jumps on a report in Pakistan's Express-Tribune Jan. 28 claiming that the ISIS commander for the country confessed under interrogation that he has been receiving funds through the United States. Authorities said Yousaf al Salafi was arrested in Lahore Jan. 22—although "sources" said he was actually arrested in December and it was only disclosed on Jan. 22. An anonymous "source" also said: "During the investigations, Yousaf al-Salafi revealed that he was getting funding—routed through America—to run the organization in Pakistan and recruit young people to fight in Syria." Unnamed "sources" said al-Salafi's revelations were shared with the US Secretary of State John Kerry during his recent visit to Islamabad, and with CentCom chief Gen. Lloyd Austin during his visit earlier in January. "The US has been condemning the IS activities but unfortunately has not been able to stop funding of these organizations, which is being routed through the US," the "source" taunted. OK, could be, but we are a little tired of the current craze for anonymous and therefore unverifiable sources.

CentCom is meanwhile boasting that Jan. 30 air-strikes near Mosul killed an ISIS chemical-weapons expert. Salih Jasim Muhammed Falah al-Sabawi AKA "Abu Malik" was said to have worked with the Saddam Hussein regime at al-Muthanna chemical complex, and joined the local al-Qaeda organization in 2005. "His death is expected to temporarily degrade and disrupt the terrorist network and diminish ISIL's ability to potentially produce and use chemical weapons against innocent people," the statement said. Kerry days earlier said "half of the ISIS leadership" has been killed in the more than 1,800 US-led air-strikes since August. (Rudaw, Al Arabiya, AP, Jan. 31)

Daily Beast hyperbolizes that Malik was "gathering equipment" before he was killed, in the words of an anonymous (of course) US "intelligence official." But this really isn't news. There were frighteningly credible reports last July that ISIS had seized chemical materials in Iraq—although finding a means to deliver them is another question. Fox News on Oct. 24 touted not-so-credible claims from Iraqi officials that ISIS had actually used chlorine-filled shells in combat north of Baghdad—specifically the towns of Duluiya and Balad. But there was no mention of casualties. Desperate for aid, Iraqi officials would have every reason to invent such claims, and Fox its own obvious agendas for hyping them.

That's right, Russia Today, just keep giving the Useful Idiots what they want to hear. On Jan. 7 they aired a segment luridly purporting to expose how the US had a "huge hand in creating" ISIS—actually entitled "Creation of ISIS." It is delivered by an irritatingly shallow and sanctimonious Hot Young Thing named Lori Harfenist. And pointing out her hotness is not mere sexism. Her hotness is obviously being used to lure in viewers, and she has no journalistic chops.

First... Of course it is a total bait-and-switch. Harfenist has no evidence that the US intentionally "created" ISIS, so instead she argues that the US created the conditions for the emergence of ISIS by destabilizing Iraq, which is quite a different thing. But she can't help alluding to the conspiranoid thesis with the highly dubious assertion that the US has "spent billions [sic] of dollars training and arming rebels across the region." We are supposed to assume that these "rebels" included ISIS. Again, the secular rebels who are fighting ISIS (and who the US has argubaly spent all too little on training and arming) are cynically conflated with ISIS. Beyond belief.

But there is worse still. Of course there is not a fucking syllable here about Bashar Assad's role in "creating" ISIS, or Russian complicity in backing him to the hilt. Assad's near-genocidal brutality against his own people led to the emergence of ISIS in much the same way that the US bombardment of Cambodia led to the Khmer Rouge. Not to mention that the dictator more directly abetted the rise of ISIS by buying their oil, doubtless hoping to divide and discedit the rebel coalition. This is (at least) as much of a factor in the rise of ISIS as the US destabilization of Iraq. All 100% invisible to Harfenist.

Finally, in addition to the glaring ommission of Assad's role in "creating" ISIS, there is the glaring inaccuracy: Harfenist tells us that the Combined Joint Task Force created by the Pentagon to oversee Operation Inherent Resolve agaist ISIS is a new command, separate from the Tampa-based Central Command that normally oversees operations in the Middle East. This is supposed to whet our appetite for conspiranoid ideas that great changes are being made around a manufactured threat. But it isn't so. The Combined Joint Task Force is not a command but a task force (hello?) under Central Command. Which you could fgure out from about 30 seconds on the CentCom website. Great reportorial rigor there, RT!

This is the vile crap that Young Americans for Liberty (an entity of the Ron Paul machine obviously modeled after Barry Goldwater's old Young Americans for Freedom) are spreading on Facebook... Do we really have to explain how this is totally fucked up? Again, the people who are heroically putting their lives on the line to fight ISIS are being... conflated with ISIS. Whoever shares this on Facebook is merely betraying the depth of his ignorance about Syria, as well as his Ugly Americanism... Yeah, all those weird Middle Easterners are the same. Let God sort 'em out. 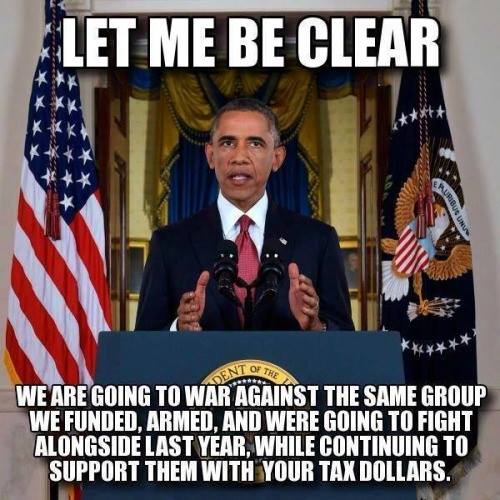 Here we go again. Conspiranoid websites like 21st Century Wire and YourNewsWire (with an unintentionally ironic kicker of "News. Truth. Unfiltered.") jump on accounts in the Israeli press that a report from the UN Disengagement Observer Force (UNDOF) in the Golan Heights claims that Israel is providing medical treatment for Syrian rebels. This is dishonestly twisted into the claim that Israel is "coordinaitng with ISIS." The usual sleight-of-hand. The phrase "Syrian rebels" is cynically conflated with ISIS, even though most factions of the Syrian rebels are fighting ISIS. The original sources that the conspiranoid sites link to, e.g. Haaretz of Dec. 7, say "Syrian rebels"—not ISIS. The closest we get to a claim about ISIS is from the Jerusalem Post (also Dec. 7), which writes: "Israel's health ministry says around 1,000 Syrians have received treatment in Golan hospitals, but maintains that only civilians are treated. The UNDOF report, on the other hand, says they have seen Israelis treating civilians as well as insurgents, including members of al-Qaida and Islamic State." None of the sources actually link to the UNDOF report, or even give its exact title.

On this ultra-flimsy basis, 21st Century Wire sports a graphic showing a masked ISIS militant with a Magen David tattoo pulling off an exterior mask with Bibi Netanyahu's face.

Also making the rounds are claims in the ultra-right Israeli website Arutz Sheva citing Iran's relentlessly lurid Press TV to the effect that a Putin aide by the name of Alexander Prokhanov is claiming that Mossad is loaning its "spying experience" to ISIS. And the same people who share this garbage are the first ones to dismiss the "MSM" as biased!

Believe what you want, conspiranoids.

Oh, and did you ever look at a map, conspiranoids?

Furthermore, ISIS has no presence anywhere near the Golan Heights or Israel. Their area of control is at the other end of Syria, in the north. This could be easily gleaned from the maps at Reuters' Fighting Islamic State page. Other jihadist factions are in the south, including Nusra Front, and it is perhaps just faintly possible that Israel is providing a degree of aid for some of them because they are fighting Hezbollah. But to jump from that to portraying ISIS as an Israeli creation....? Again, whatev, conspiranoids.

The perennially wacky conspiranoid site Global Research (of course) jumps on claims from Iran's Fars News Agency citing the pro-Iran Islamic Supreme Council of Iraq as citing sources in Iraq's parliament saying Iraq's military shot down two British planes loaded with arms intended for ISIS. We aren't told how they knew the arms were intended for ISIS, or how the downing of two British planes in Iraq could be so effectively covered up that it has received no other coverage. Later in the piece, we are credulously told that ISIS fighters are using US-made weapons—which is hardly a surprise, as everyone knows ISIS took plenty of these from the Iraqi military after it collapsed in Mosul last year!

Yet Useful Idiots post this garbage all day on Facebook, to no purpose other than entrenching their own confirmation bias and sanctimony. Pathetic.

No, John McCain did not meet with ISIS

You've all seen that stupid Facebook meme that purports to show John McCain meeting with ISIS fighters in Syria? Same old BS. Once again, the people who are fighting ISIS are conflated with ISIS in condescending, racist, and willfully ignorant manner. It now comes to our attention that Sen. Rand Paul has repeated this bogus charge, telling the incredibly credulous Daily Beast in September: "Here's the problem. He [Sen. John McCain] did meet with ISIS, and had his picture taken, and didn't know it was happening at the time." The Washington Post's Fact Checker page on Sept. 18 gave Rand's claim "Four Pinocchios"—their highest ranking, saved for total fabrications. Here (in the unintentionally ironic conspiranoid catch-phrase) is what really happened:

On May 27, 2013, McCain slipped across the Turkish border to spend a few hours in Syria with members of the Free Syrian Army. Mouaz Moustafa, executive director of the Syrian Emergency Task Force, who helped arrange the visit and was with McCain, said many soldiers were members or commanders of the Northern Storm brigade, which serves under the army's Supreme Military Council. One man was Gen. Salim Idriss, who at the time was chief of staff of the Supreme Military Council.

"These guys, the Northern Storm brigade, are bitter enemies of ISIS," Moustafa said, in part because they were so effective. As a result of the photos of the fighters with McCain, ISIS declared that "everyone in this picture needs their head chopped off," he said. "After the meeting, many of the Northern Storm were completely killed by ISIS."