END_OF_DOCUMENT_TOKEN_TO_BE_REPLACED

A massacre at Adra, outside Damascus, is being attributed to the Nusra Front, which on Dec. 16 may have killed over 100 civilians after seizing the town, targetting Alawites, Druze, and Christians. Some civilians were reportedly "saved" by regime army troops, who stormed houses where they were being held. These claims are aggressively plied by the official media in countries that back the Assad regime (Russia Today, Voice of Russia, Tehran Times, Xinhua) and the "alternative" media in countries that oppose the Assad regime (Antiwar.com, Intifada Palestine—which is, very significantly, not based in Palestine, where Assad is actually very unpopular). The anti-Assad Linux Beach blog is skeptical about the claims, noting that the presumably more objective BBC News account put the death toll at 10, not the 100 attributed elsewhere to anonymous regime sources. Linux Beach also engages in the cyber-sleuth routine to argue that some photos supposedly taken by the jihadists of bodies they'd mutilated were actually recycled from other, unrelated atrocities (a trick the Assad-supporters are always accusing the mainstream media of). Linux Beach more astutely points out that the Adra claims come just as "the death toll from a 10-day Syrian regime air offensive on Aleppo rebels passed 400," in the words of AFP. Most have been killed by the regime's improvised "barrel-bombs," seemingly designed to win the maximum number of civilian casualties. ("Aleppo rebels" actually means rebel-held areas of the city; we may assume a high proportion of non-combatant deaths.) A Google News search for "Aleppo" brings up such mainstream US sources as the Washington Post, LA Times and CNN. Pretty predictable, eh?

The malady of selective outrage applies to the "alternative" or "left" or "anti-war" (sic!) media no less than the much-maligned MSM. We've noted before that Noam Chomsky's concept of "worthy and unworthy victims" in the imperial accounting is logic ironically embraced by the Chomskyians themselves. (Although Chomksy himself hasn't been too bad on this particular question.) Hence, the "left" parades the Adra massacre, while turning a blind eye to Aleppo, even cheering on Seymour Hersh's touting of Bashar Assad as "the only solution for stability." Slavoj Žižek in The Guardian condescends to the Syrians, presumably from somewhere safe and warm: "Syria is a pseudo-struggle." Reads the introdek: "The ongoing struggle we see is a false one, lacking the kind of radical-emancipatory opposition clearly perceptible in Egypt." His lead is all about "humanitarian intervention" (and why we should oppose it, of course), typically moving the focus of the discussion from the Syrians to the West before he even gets started. For mainstream and "left" talking heads alike in the West, it is always about "us," with the Syrians reduced to bit players in their own drama. He also adds an "(allegedly)" before the notion that Assad used poisonous gas, which is rather unwarranted this late in the day. Arab anarchist blogger Leil-Zahra Mortada rightly calls this out as "coprolalia" (talking shit), and Žižek as a "pseudo-Leftist" poser, making pronouncements from on high rather than seeking to learn from the lived experience of revolutionary Syria.

And, once again, we have the irony of the supposed "left" lining up with elements of the right-wing establishment in enthusiasm for Syria's dictatorship. And it isn't only paleocon elements, which traditionally see dictators as guarantors of stability; we have noted that even some neocons are abandoning their usual "regime change" agenda to get on the Assad bandwagon. Shoshana Bryen of the Jewish Policy Center takes heart in an "as yet unverified" report (from Orthodox Jewish website Vos Iz Neias?) that regime soldiers are protecting Damascus' 2,000-year-old Jobar Synagogue (earlier this year reported to have been destroyed) and other ancient Jewish sites in Syria from jihadist attack. She notes a Times of Israel account claiming that rare Torah scrolls already plundered from the synagogue are in the hands of jihadists, who hope to ransom them to win freedom for their compatriots held by the regime. Bryen is actually more forthright than her "left-wing" counterparts in facing the reality that Assad's partisans are also "mass murderers," even while looking to them as the paradoxical protectors of Syria's Jewish heritage.

With the rarest of exceptions, the "left" in the US and Europe is utterly uninterested in what should be its most critical work in Syria: building vigorous solidarity with the secular civil resistance. We are usually told that this civil resistance has been pushed aside by the jihadists. But as we have repeatedly emphasized, if indeed the secular-democratic elements in Syria are doing poorly, that means they need more solidarity—not less.

More from the media-savvy insurgents of Liberated Kafranbel... 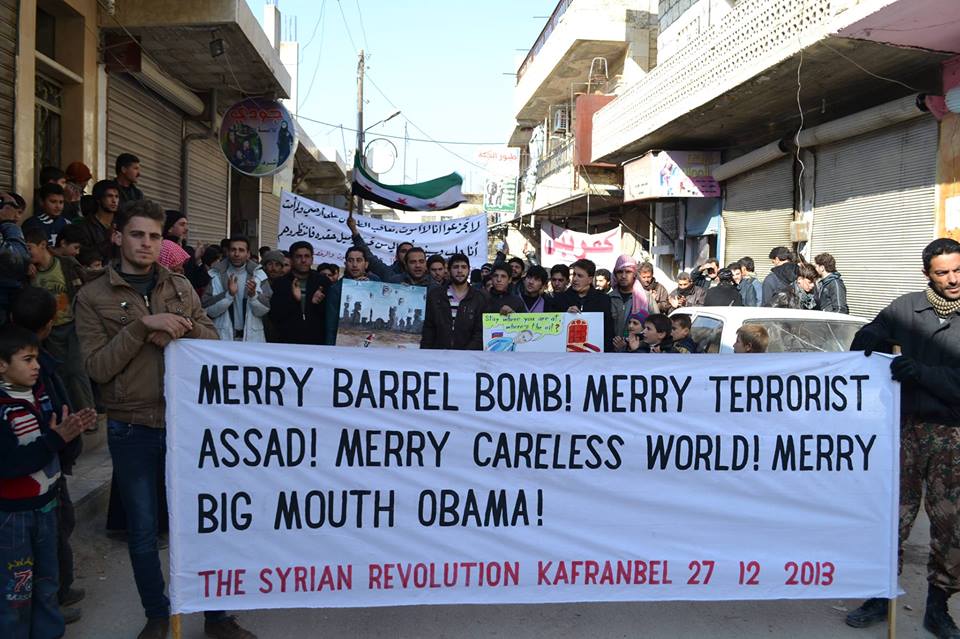