END_OF_DOCUMENT_TOKEN_TO_BE_REPLACED

Russia's Federal Security Service (FSB), successor to the good ol' Soviet-era KGB, applies pressure on the VKontakte social networking site—in a bid to snuff post-electoral protests, and put a long-escaped genie back into the totalitarian bottle. Good luck with that, guys. From Reuters:

Russia's top social networking site on Thursday defiantly rejected a request by the Federal Security Service to block opposition groups from using it to organize street protests accusing the authorities of rigging this week's election.

Over 45,000 people in Moscow alone have pledged on Facebook and the Russian site, VKontakte, to join fresh protests on Saturday against the 12-year rule of Vladimir Putin and the victory of his United Russia party in Sunday's parliament vote.

The move by the Federal Security Service (FSB), successor to the Soviet KGB, was reminiscent of attempts by some Arab governments to sever online communication between protesters.

"We received a request from the FSB asking us to close activities by groups calling to make noise on the street, to organize a revolution," VKontakte spokesman Vladislav Tsyplukhin said in e-mailed comments.

Putin meanwhile played the facile card of scapegoating the US for the protests, saying that "mercenary" Kremlin foes launched the demos after receiving "a signal" form Hillary Clinton. The same jive we heard regarding Egypt earlier this year, regarding Belarus last year, and regarding Iran the year before that. Do you think maybe it's just vaguely possible that lots of Russians really are pist off at Putin? Just a thought...

See our last posts on Russia and the politics of cyberspace.

Please leave a tip or answer the Exit Poll.

Gene Sharp is in the news again. Cue the paranoids and freedom-haters.

Well, Putin and Medvedev seem to have got away with a cynical little switcheroo, with the former once again president and latter about to become prime minister—a reversal of the roles they held over the past term, when Putin was constitutionally barred from a third consecutive one. This of course follows a tainted election, and is taking place in an atmosphere of terror akin to that which has obtained in neighbor Belarus over the past several years. Now the New York Times writes, in a May 9 story entitled "Protesters in Moscow Alter Approach to Avoid Arrest":

Since Monday, the police have been arresting any people they think even remotely resemble antigovernment demonstrators, sometimes just because they are wearing white ribbons or even white T-shirts.

In response, protesters in Moscow have adopted new tactics, "dilemma protests" and flash mobs, to avoid the mass arrests.

The evolving tactics in Moscow are not novel. In a primer on nonviolent protest, "Sharp's Dictionary of Power and Struggle," Gene Sharp, an American intellectual, described a "dilemma protest" as a performance of an action so inchoate and unorthodox that police are trapped. If they let it happen, they are encouraging it, but if they arrest people they risk looking either silly or arbitrary and unjust, which is the point.

"This type of activity enables resistance to continue against opponents who are applying extreme repression," Mr. Sharp wrote. Acts of resistance in small groups, he wrote, are effective when larger "bases for resistance have been neutralized, controlled or destroyed by the opponents."

How long before the conspirosphere is bleating about how the Russian protests are all an astroturf illusion conjured by this mysterious puppet-master? The countdown begins... 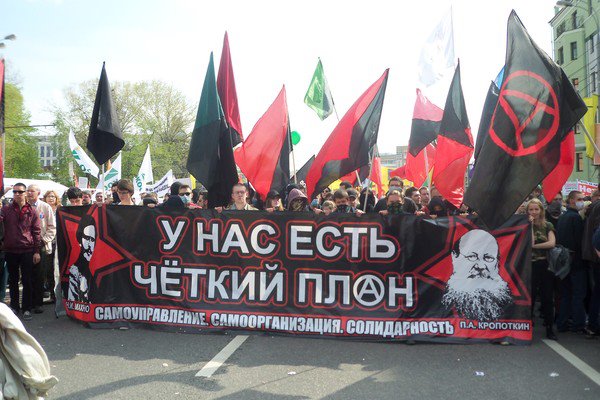 This was posted on Facebook without attribution, so I have no idea what the copyright situation is, but I am going to take the liberty of displaying it here. Presumably from the recent anti-Putin marches. A very strong anarchist contingent, with a banner displaying the visages of Peter Kropotkin and Nestor Makhno! Does my heart good! Can anyone translate the text on the banner for us?

Several dozen young protesters continue to Moscow's Kudrinskaya Square, despite arrests and police raids on the encampment. The occupation was launched following a demonstration of some 20,000 the day before Putin's May 7 inauguration, which exploded into a fierce battle with police. Protest leader Sergei Udaltsov and anti-corruption blogger Alexei Navalny face charges punishable with as much as three years in prison. (AP, Bloomberg, May 17; RIA Novosti, Bloomberg, May 16; RIA Novosti, May 15)