END_OF_DOCUMENT_TOKEN_TO_BE_REPLACED

9-11 and Syria: a propaganda field day

By now we've all seen the ugly meme, at least if you've got a Facebook account. A uniformed serviceman holds a hand-written sign over his face reading "I didn't join the army to fight for al-Qaeda in Syria."  (In case you've missed it, it is of course flaunted by the right-wing xenophobes at InfoWars.) Hopefully, we don't have to explain how this is a shameful betrayal of the secular civil resistance in Syria—it simply denies their existence, painting the entire opposition as al-Qaeda. And you certainly don't have to be pro-intervention to recognize this. A related ugly meme shows a face-palming Obama with the caption: "That awkward moment when you realize the only allies the US can muster for a Syria attack... are the terrorists who flew planes into your buildings twelve years ago."

It is hardly surprising that Glenn Beck, an avid peddler of rank Islamophobia, is on this bandwagon. Right Wing Watch notes (with a video link): "Furious about the speech President Obama delivered on Syria last night, Beck asserted that any military action against the Syrian regime would be for the benefit of al Qaeda, which would make Obama guilty of aiding and abetting the enemies of the United States of America and 'that makes him a traitor.'"

Unfortunately, this ugliness is being embraced by people you really wish would know better. Also making the rounds is a YouTube clip of an interview with Nobel laureate Mairead Maguire, who apparently visited Syria and the refugee camps in Lebanon, "at the invitation of the patriarch of Syria." She waxes outraged at all sorts of horrific atrocities by the jihadists (which are doubtless real enough), while having nothing to say about those committed by the Assad regime. Obviously, her junket was arranged by Syrian Christian leaders, who cherry-picked victims of jihadist terror for her to talk to. Now, Syrian Christians have every reason to fear the worst from the jihadists, and consequently many see the Assad regime as the lesser evil. But Maguire obviously went to them (rather than an exponent of the secular civil resistance, e.g. the Local Coordination Committees) because she wanted to be regaled by stories of jihadist terror, and not those of Assad's state terror. Which is the greater terror, if only because of access to greater fire-power.

It shouldn't be too surprising that "leftists" are buying this nonsense, and are as avidly posting these Facebook memes as their counterparts on the Islamophobic right. Recall that the ever-predictable Robert Fisk was spewing the same line just a few days ago. What makes it hilariously ironic is that, as we've pointed out before, those jihadists now being so demonized in Syria are exactly the same ones that "leftists" were so recently rooting for in Iraq! Another example of the left's paradoxical love-hate relationship with the jihad.

Following the Russian proposal for Syria to place its chemical weapons under international control (which we can't help but view as Putin's bid to buy time for Assad to go on killing his people by "conventional" means), the US Senate is shelving the resolution to authorize the use of force, with Obama's acquiescence. (WP, Sept. 11) We think Obama was also trying to buy time by punting to Congress—something he didn't do in the Libya intervention, although the same Orwellian arguments were raised by the White House about how air-strikes aren't really "war." (Jerusalem Post, Sept. 9) After the Congressional punt was announced, the Washington Post's WonkBlog wryly called it "The Obama administration's brilliant strategy to keep us out of Syria," despite Assad having called his "red line" bluff. Sounds about right.

Oh, and on the subject of Orwell... as if just to drive home the poor moral position of the US empire to protect the world from murderous dictators, Secretary of State John Kerry spent much of today meeting with senior members of the "foreign policy establishment" to discuss options on Syria—including elder war criminal Henry Kissinger. (HuffPo, Sept. 11) Kissinger, in addittion to his many other horrific crimes, was of course a mastermind of Gen. Augusto Pinochet's Sept. 11, 1973 blood-drenched military coup in Chile—dubbed the "other 9-11."

At last year's 9-11 commemoration, we noted that the Benghazi attack and Cairo riots that day signaled a re-ignition of the demoralizing jihad-versus-GWOT spectacle, which had been lagging due to secular movements seizing the initiative from both al-Qaeda and the Empire in the Arab Revolutions. After a year of retrogression—due in no small part to Assad's near-genocidal counter-insurgency—it would be nice to remember that the Syrian revolution began with a civil, secular, pro-democracy groundswell from below. And even as al-Qaeda, Tehran, Riyadh, Moscow and Washington have turned Syria into a geopolitical chessboard, that pro-democracy movement hasn't gone anywhere.

More from the media-savvy insurgents of Liberated Kafranbel... 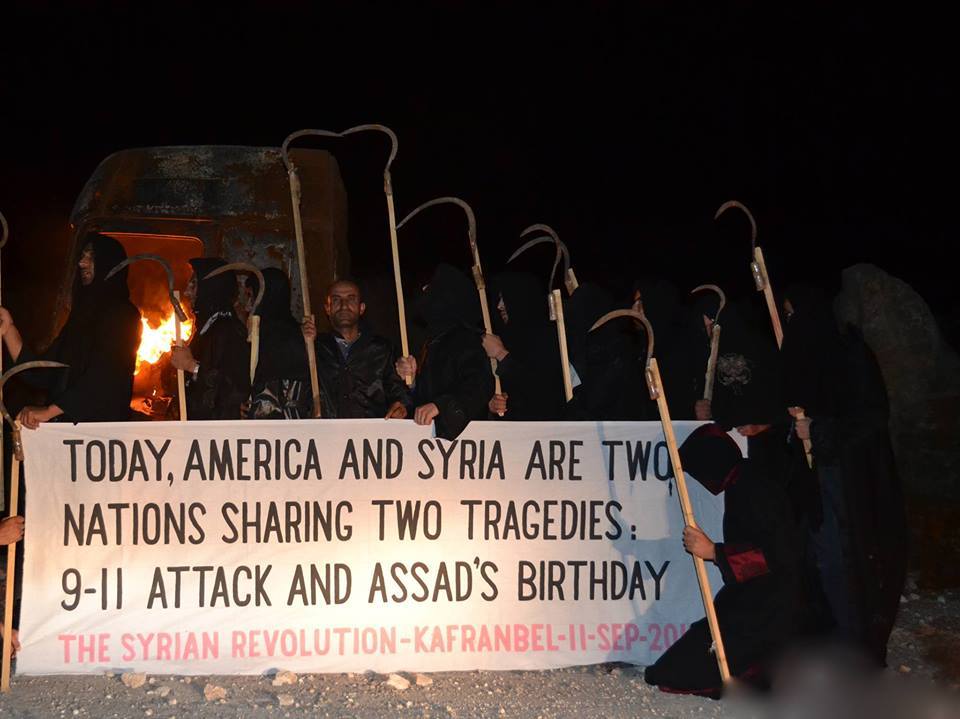 Happy birthday, Bashar Assad. May it be your last (as a free man, at least)...