END_OF_DOCUMENT_TOKEN_TO_BE_REPLACED

Thousands of Maya followers of the Zapatista National Liberation Army (EZLN) marched, masked but unarmed, on the towns of San Cristóbal de las Casas, Ocosingo, Las Margaritas, Palenque and Altamirano, in Mexico's southern state of Chiapas, marking the turning of the Maya calendar Dec. 21. The largest march was in Ocosingo, on the edge of the Lacandon Selva, the rebels' jungle stronghold, with 6,000 arriving at dawn for a silent procession through the town's center. A mass silent vigil of thousands of Zapatistas in the town's central square continues at press time, despite unseasonable rain. There were no speakers, and no visible leaders present. The EZLN is expected to release a communique for the occasion. The group's last communique was in May 2011, proclaiming solidarity with the poet Javier Sicilia and his movement against Mexico's Drug War militarization. The EZLN's spokesman Subommander Marcos also issued a presonally signed statement on the then-upcoming Mexican elections later last year. (CNN Mexico, W Radio, APRO, Dec. 21) 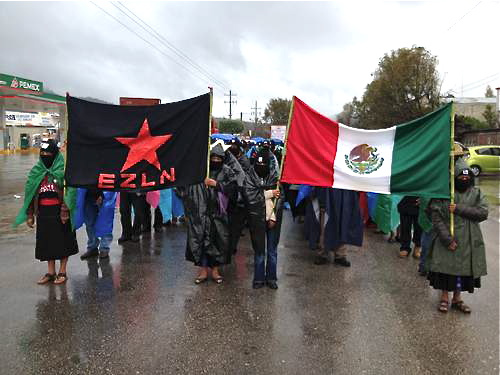 zapatistas has nothing to do with the mayans

YOUR INFOMRMATION IS WRONG AND ABSOLUTELY ABSURD! THIS MARCH YOUR ARE TALKING ABOUT IS NOT MAYAN IN ANY WAY SHAPE OR FORM!  THESE INDIGENOUS CROUD IS NOT NECESSARILY MAYAN. THE ZAPATISTAS MARCHED THIS DECEMBER 21ST TO DEMOSTRATE THEIR SOLIDARITY FOR THE MASACRE OF THEIR PEOPLE EXACTLY 15 YEARS AGO BY THE MEXICAN MILITARY. THEIR MARCH IS TO SHOW THE GOVERMENT THAT THEY HAVE NOT FORGOTEN ABOUT THIS HORRIFIC MASSACRE. NOTHING TO DO WITH MAYAN CALENDAR. ALL THOSE LIES INVENTED ABOUT THE CALENDAR  NEED TO STOP. THE MAYAN CALENDAR NEVER MENTIONS ANY SPECIFIC DATES. THERE ARE NO PROPHESIES MADE BY THE MAYAN. THEY WERE TOO INTELLIGENT TO MAKE SUCH RIDICULOUS STATEMENTS. THEY WERE EXCELLENT MATHEMATICIANS AND ASTRONOMERS. THEIR CALENDAR IS ASTRONOMICALLY AND MATHEMATICALLY MORE ACURATE THAN OUS. THE MAYAN CALENDAR NEVER PIN POINTS AT DECEMBER 21, 2012 AS ANY SORT OF SIGNIFICANT DATE. GET YOUR  FACTS STRAIGHT AND DO SOME RESEARCH BEFORE YOU POST THIS TYPE OF INFORMATION. BE RESPNSIBLE. DON'T YOU KNOW THAT THIS TYPE OF MISLEADING INFORMATION IS EXACTLY WHAT GIVES WAY TO MORE IGNORANCE?

The Zapatistas are Maya

You betray your own ignorance. The Zapatistas certainly are Maya (of the Tzeltal, Tzotzil, Chol and Tojolabal linguistic groups). The Maya Long Count certainly does reference specific dates, although there is a slight degree of ambiguity on how they are best pinpointed in today's common calendar, as made clear by the Maya Decipherment website (which is scholarly, and not New Age-oriented). There were indeed Maya prophecies, although not of apocalypse and not particulaly associated with the date that we today render as Dec. 21, 2011. (Ever hear of the Chilam Balam?) The Acteal massacre of 1997 was on Dec. 22, not Dec. 21, and is not referenced in the EZLN communique that has been issued along with the current mobilization (see below). The communique does address notions of the "end of the world," but in a spirit of renewal, not of doom.

Zapatista communique on the "end of the world"

Here is the EZLN's Dec. 21 statement, as it appears on their official website:

From the mountains of the Mexican Southeast.
For the Clandestine Revolutionary Indigenous [Committee]–General Command of EZLN

Pithy but poetic, and refreshingly optimistic...

The EZLN have released a Dec. 31 communique denouncing the contested Mexican presidential election as a "media-driven coup d'état," and pledging to "try to construct the necessary bridges towards the social movements that have arisen and will arise, not to lead them or take their place, but rather to learn from them, from their history, from their journeys and fates." English translation online at Upside Down World.

On Dec. 29, Subcommander Marcos issued his own letter on the election of Enrique Peña Nieto, online in translaiton at My Word Is My Weapon.

After a long period of silence, Subcommander Marcos has suddenly become verbose again. His latest communique, the new installement of a (so-far) four-part series on themes of discrimination and multi-culturalism entitiled "Them and US," can be viewed in translation on the wesbite Censored News. He also released a cartoon self-portrait (printed by La Jornada) which seems to poke fun at himself and his critics simultaneously, complete with numerous pop-culture references. Hermann Bellinghausen noted in La Jornada Jan. 13 that Marcos had complained that "When the Sub doesn't speak, the EZLN doesn't exist for the media," and admitted that his cartoon was a ploy to "put out the fire with gasoline..."