END_OF_DOCUMENT_TOKEN_TO_BE_REPLACED

Amid the mass internment of ethnic Uighurs in China's western Xinjiang province, reaction within the greater region has been largely muted. Dolkun Isa, head of the Germany-based World Uyghur Congress, last month blasted the leaders of Muslim countries for being largely "silent" over the "ethnic cleansing" of the Uighurs, calling it the "shame of the Muslim world." Dolkun said his own mother died in one of the camps last May, and his family did not even find out about it until weeks later. Dolkun charged that some Muslim governments "even support the Chinese government policy." (France24, Dec. 19)

This was almost certainly a reference to Pakistan, which had just issued a statement defending its ally China after questions were raised about the fate of dozens of Uighur women who married men from the adjacent Pakistani region of Gilgit-Baltistan and are now believed to be detained. "Some section of foreign media are trying to sensationalize the matter by spreading false information,” a Pakistani foreign ministry representative said, responding to charges that his government is cooperating in the mass detention by deporting residents across the line to Xinjiang. "As per Chinese authorities, out of 44 women, six are already in Pakistan. Four have been convicted on various charges, three are under investigation, eight are undergoing voluntary training. Twenty-three women are free and living in Xinjiang of their own free will." (SCMP, Dec. 20)

Egypt last year came under criticism for deporting Uighur students and workers back to China, presumably to face forced internment. At least 12 were deported over the past months, with dozens more named as detained and awaiting deportation. (The New Arab, Jan. 1)

Over the past weeks, protesters in Kyrgyzstan, which also borders Xinjiang, have repeatedly mobilized to oppose China's persecution of the Uighurs and other Turkic peoples. They've gathered in the central square of capital Bishkek with placards reading "No to Chinese fascism!" Noting that ethnic Kyrgyz have been detained in Xinjiang along with the Uighurs, they accuse Kyrgyzstan's government of betraying their kinsmen by remaining silent and maintaining close ties to China.

"Kyrgyzstan's leadership, without any consultation with the people, has taken loans from China, putting all of us in financial dependence. That is what we are challenging here, among other things," protester Zholdoshbek Orozov told Radio Free Europe/Radio Liberty.

The protests have been organized by the Committee to Protect Kyrgyz People in China and an allied ethno-nationalist group called the Kyrgyz Choroloru (Kyrgyz Knights). Unfortunately, the right-wing and Sinophobic aspect of the protests is clear. Among their demands is the immediate deportation of all foreign nationals, including Chinese, living "illegally" in Kyrgyzstan—which, ironically, could result in their detention if they are ethnic Uighurs. (RFE/RL, Jan. 7; RFE/RL, Dec. 20; RFE/RL, Dec. 5)

Past news accounts refer to the Kyrgyz Knights as a "vigilante group," noting various instances of organized thuggery. In December 2014 they menaced patrons and workers at a bar that was said to be fronting for a brothel frequented by Chinese businessmen. In May 2015, they effectively shut down a public meeting at a Bishkek restaurant organized by the city's LGBT community for International Day Against Homophobia, Transphobia, and Biphobia. (RFE/RL, Global Voices) In this light, the group's accusations of "Chinese fascism" and use of the swastika to tar the Chinese state (see photo below) strikes us as another case of fascist pseudo-anti-fascism.

The group appears to be variously known as Kyrk Choro (40 Knights), Kyrgyz Choroloru and KyrgChoro. All are apparently a reference to the 40 fighters in the traditional Epic of Manas who fought in defense of the Kyrgyz nation. 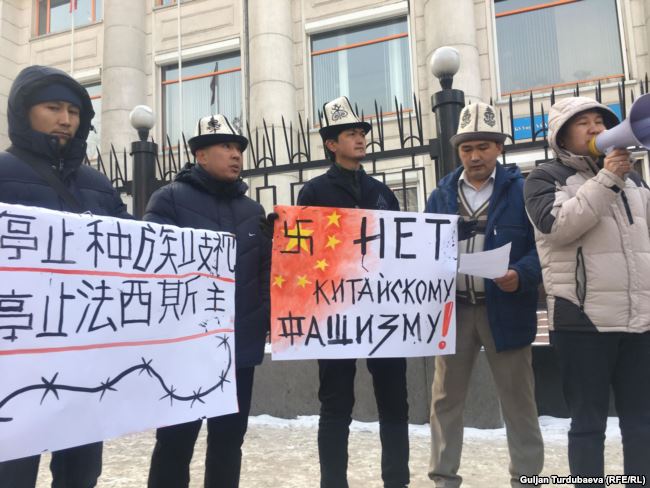