END_OF_DOCUMENT_TOKEN_TO_BE_REPLACED

We aren't sure how much method to place in Donald Trump's madness. Right on the heels of the outrage over his diplomatically incorrect telephone conversation with Taiwan's President Tsai Ing-wen comes word that he's appointed Iowa Gov. Terry Branstad as the next US ambassador to China—news that will apparently be welcome in Beijing. The New York Times says that Branstad describes China's exceptionally authoritarian President Xi Jinping as an "old friend." Reuters tells us Branstad said he's had a "30-year friendship" with Xi, and added: "The president-elect understands my unique relationship to China." A Chinese Foreign Ministry spokesperson reciprocated the warmth, calling Branstad an "old friend" of China.

But this follows days of ominous chill. Beijing took the unusual step of lodging what it described as a "solemn protest" with the US government over the Tsai phone call, and reiterated that its economic and diplomatic relationship with Washington depends on US acceptance of the "one China" principle. (Straits Times) Chinese Foreign Minister Wang Yi was quoted saying less formally that the call was a "little trick" by Taiwan. (Focus Taiwan)

China File has made note of Trump's tweets in response to the outrage. First he tried to foist the blame onto Tsai: "Interesting how the U.S. sells Taiwan billions of dollars of military equipment but I should not accept a congratulatory call... The President of Taiwan CALLED ME today to wish me congratulations on winning the Presidency. Thank you!" But he quickly followed this up with more of his requisite China-bashing: "Did China ask us if it was OK to devalue their currency (making it hard for our companies to compete), heavily tax our products going into their country (the U.S. doesn't tax them) or to build a massive military complex in the middle of the South China Sea? I don't think so!"

Trump just earlier this year explicitly broached actual war with China. As ChinaTopix noted in March, his team wrote on the campaign website: "A strong military presence will be a clear signal to China and other nations in Asia and around the world that America is back in the global leadership business." And he told a reporter when asked how he'd handle China: "I would use trade to negotiate. Would I go to war? Look, let me just tell you. There's a question I wouldn't want to answer... we need unpredictability."

This exchange seems to have precipitated a Rand Corporation report commissioned by the US Army on the risks of war with China, in which former Obama advisor David Gompert wrote: "War between the United States and China could be so ruinous for both countries, for East Asia, and for the world that it might seem unthinkable. Yet it is not: China and the United States are at loggerheads over several regional disputes that could lead to military confrontation or even violence between them. If an incident occurred or a crisis overheated, both have an incentive to strike enemy forces before being struck by them." (Radio Australia)

Keith Olbermann has been among liberal voices portraying the Tsai phone call as a threat to peace with China—and serving the interest of Russia. This seems to assume that Putin has already ditched Xi for Trump—something that Xi is clearly worried about.

Commentators in the People's Republic have been making similar noises. "It is still too early to make any assured predictions but I think maybe I can see that a cloudy storm is gathering on the horizon," Shi Yinhong, a Renmin University foreign policy expert, told The Guardian. "This is not good, of course." No, we would think not.

And coincidentally or not, the phone-call flap comes just as China is launching a major initiative to modernize its military. The People's Liberation Army recently issued a new guidance calling for the use of what it calls "rapid force projection." (Washington Times) This is certainly ominous news for Taiwan and the countries that contest Beijing's claim to maritime teritory in the flashpoint South China Sea.

The consistently annoying John Pilger (who recently was telling us that Hillary Clinton was more dangerous than Trump) is now happily plugging his new film predicting imminent apocalypse, The Coming War on China. (Not war "with" China, but "on" China—as if Beijing's own bellicosity bore no responsibility for the growing tensions, a notion that would certainly be greeted with incredulity in Taiwan.)

Then there's the conspiracy theory that the phone call was instrumented by old-school Cold Warriors who really do have hot nuts for war with China—specifically those unreconstructed paleo-hawks at the Hertiage Foundation. CNN initially reported that the call was arranged by Stephen Yates, a Heritage Foundation fellow and former Asia advisor to the Bush-Cheney campaign. CNN, however, has now deleted that claim from the text, with a correction line disavowing it. Taiwan Focus names Heritage founder Edwin Feulner as having "played a key role in setting up the call." Feulner apparently joined the Trump team in August, and met with Tsai during a visit to Taipei in October.

And the inevitable real-estate theory. Shanghaiist reports: "The mayor of Taoyuan confirmed rumors...that US president-elect Donald Trump was considering constructing a series of luxury hotels and resorts in the northwest Taiwanese city." Risking world war to build cheezy hotels? Talk about a "Götterdämmerung without the Gods."

And how are Taiwan's own progressives viewing this imbroglio? Three Taiwanese actvists, Lin Fei-fan, Chen Wei-ting (both of Taiwan March) and June Lin (Democracy Tautin), have an op-ed in the Washington Post, "Americans should stop using Taiwan to score political points against Trump and China."

When it comes to human rights in Tibet, freedom of speech in Hong Kong or maintaining strong relations with Japan or the Philippines, U.S. pundits rarely skirt controversy for fear of "provoking" China. Why should the rhetoric change when it comes to Taiwan—a vibrant young democracy led by a female head of state which boasts universal health care and is poised to become the first place in Asia to legalize same-sex marriage?

And yet it's a fact that Tsai appears to have exploited Trump's anti-China instincts to score a point against Beijing. Brian Hioe writing on the Taiwanese activist website New Bloom says that many in the island nation breathed a "sigh of relief" at the phone call, taking it as a signal that Trump will not abandon Washington's military committment to Taiwan. But he also recalls that Trump had previously accused Taiwan alongside Mexico of being an economic drain on the United States.

And this is telling. The distinction between China and Taiwan is very important to independence-minded Taiwanese. It is probably considerably less so to Trump, who could well conflate both nations in an undifferentiated Sinophobia. We hope Tsai Ing-wen realizes this.

It is possible that Trump just took the call because he's a clueless rube who didn't know any better. Or, the mixed signals of the Tsai phone call and the Branstad appointment may be a calculated tactic to keep Beijing off balance—to keep Xi wondering if he will be invited to join the Trump-Putin axis, or if China will stand alone against a hostile and united Russo-American bloc. The first would definitely be bad news for Taiwan. But if the nation serves as a spark (or pretext) for an apocalyptic superpower conflict, that won't be good for Taiwan either—or anyone else.

Trump just upped the ante in his cynical game with Beijing, explicitly posing the "one China" policy as a bargaining chip to wrest concessions. "I don’t know why we have to be bound by a One China policy unless we make a deal with China having to do with other things, including trade," he told Fox News. "I mean, look, we're being hurt very badly by China with devaluation; with taxing us heavy at the borders when we don’t tax them; with building a massive fortress in the middle of the South China Sea, which they shouldn't be doing; and, frankly, with not helping us at all with North Korea." (NYT)

This is pretty damn blatant. We hope that Tsai Ing-wen and Taiwanese independence advocates realize that Taiwan is being used here—and that Trump will sell out Taiwan if he reaches accommodations with China, just as readily as he is now exploiting Taiwan to try to win such accommodations...

Well, this is a little disturbing. A Facebook friend in Taipei posted this photo two days ago. Apparently a group of Taiwan independence advocates responded to the Tsai-Trump call by taking to the streets in a car festooned with both the US flag and that of their aspired republic... 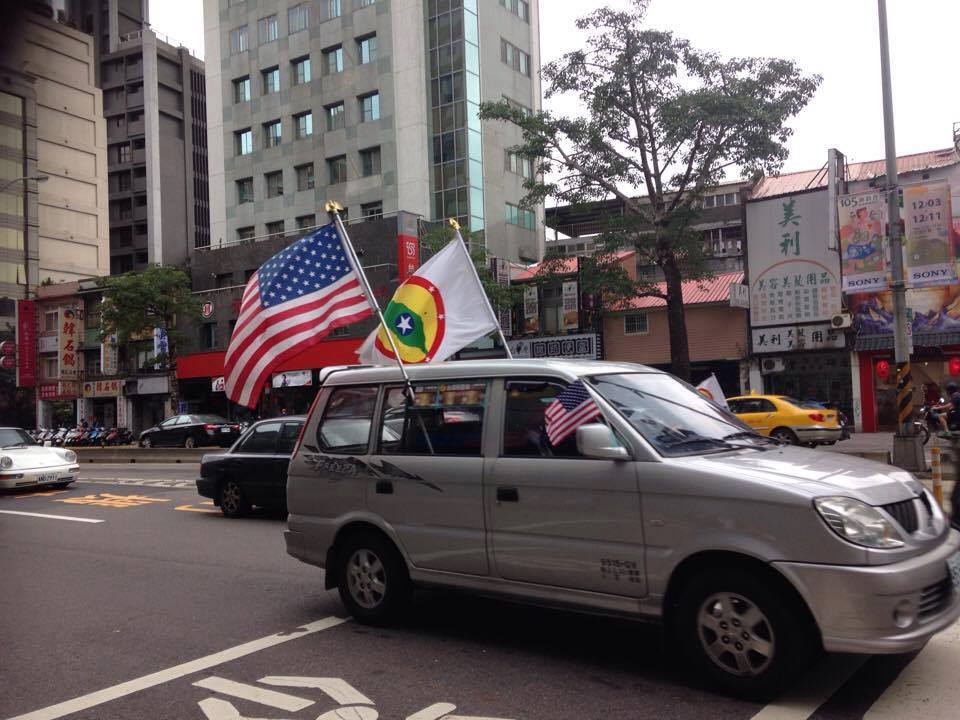 We are informed that the group in question is the self-proclaimed "Taiwan Civil Government." A June 20 article in Taipei's China Post informs us that the group considers Taiwan's re-integration into China after World War II to have been illegal, and that the island technically remains a Japanese colony under rule of the US military. It has established an office in Washington, and plans to seek recognition from the US as the legitimate government of Taiwan. (Not sure who elected them.)

We question how much support the TCG actually has among independence advocates. We note that their Taiwan Civil Government flag pictured above does not appear on Wikipedia's "Proposed flags of Taiwan" page. (Independence advocates reject the current Republic of China flag as not Taiwanese.) But also not pictured there is the tiger-image flag of the Republic of Formosa—the short-lived independent state that existed between the collapse of Imperial Chinese rule in Taiwan in 1895 and the long Japanese occupation that began later that year. Some independence advocates have called for reviving this flag... 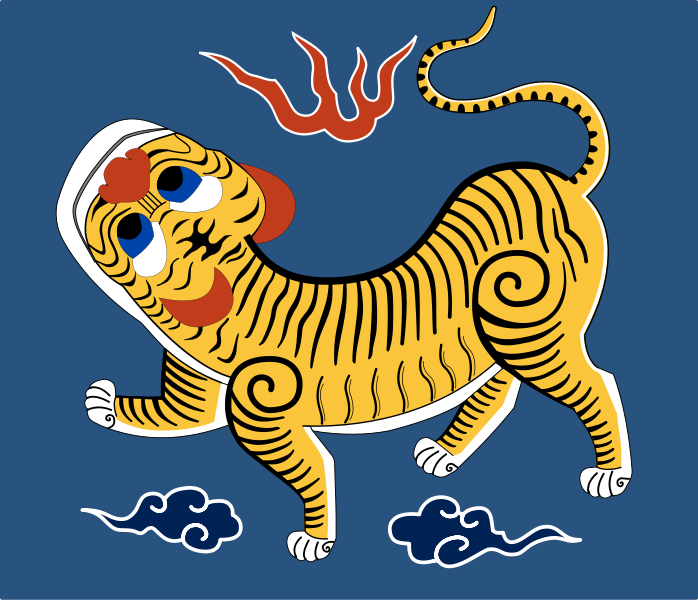 We also note this Getty file photo that shows TCG activists flying their flag alongside that of Japan—which seems like an odd posture for independence advocates.

Finally, it should be noted that in broaching rejection of the "one China" policy, Trump has said nothing in support of the "One China, One Taiwan" position of the independence advocates...

The Pentagon is demanding that China return an "unlawfully seized" underwater drone, or Ocean-glider, after a Chinese war vessel took the device from waters near a US oceanographic ship. The USNS Bowditch was sailing some 100 miles off the Philippine port at Subic Bay when the incident occurred. A Chinese naval ship that had been shadowing the Bowditch put out a small boat that intercepted the drone before it could return to the US ship. Beijing says it seized the drone to protect international shipping. (CNN)

"Knowing Chinese military officials for many years and how orders are communicated from the highest power centers in Beijing down to commanders on the ground or water, this was very likely a highly planned and escalatory move to show China will not take matters lightly when it comes to President-elect Trump's phone call and comments on Taiwan, or Chinese actions overall," Harry Kazianis, director of defense studies at the Center for the National Interest, told The Hill.

Yeah, if I were Xi Jinping I'd be paranoid...

First Trump appoints Peter Navarro, the author of books called Death by China and The Coming China Wars, as head of his new trade council. Navarro apparently has something of a redundancy fetish, refering to China in one of his frequent tirades as "totally totalitarian." China Daily rightly accuses him of "apocalyptic language." (The Guardian)

Then Trump tweeted that "the United States must greatly strengthen and expand its nuclear capability until such time as the world comes to its senses regarding nukes." (the passive-aggressive sop to the notion of the world "coming it its senses" making it all the more sickening.) Asked to clarify by host Mika Brzezinski of MSNBC: "Let it be an arms race. We will outmatch them at every pass and outlast them all." (The Guardian, NYT)