END_OF_DOCUMENT_TOKEN_TO_BE_REPLACED

The View Today from Erbil 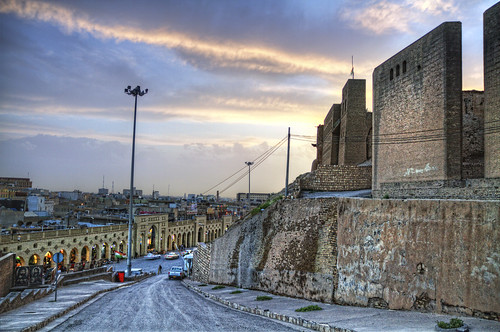 ERBIL — Life in Erbil continues pretty much as normal. Children chase the pigeons that gather by the fountains outside the bazaar at the foot of the city's ancient citadel; young couples share an ice cream; women try on shoes; and the men sit in the shade drinking endless tulip glasses of sweet chai and chatting—probably about the twists and turns of the world cup, judging by the crowds that gather around the large number of TV screens showing each and every game in tea shops, shopping malls, hotels and restaurants.

Yet Mosul, scene of a dramatic take-over by ISIS fighters just days ago, the complete disintegration of the locally deployed units of the Iraqi army, and the flight of half a million terrified citizens to the borders of the Kurdish region, is just a few hours' drive away.

The rest of Iraq has descended into deepening chaos, but the Kurdistan region remains seemingly untouched. This is because, by any measurement except according to the map that was drawn up by the British almost a hundred years ago, and by the formalities of diplomacy, Kurdistan is no longer part of Iraq. It has its own government, parliament, flag, and armed forces—the peshmerga, those who face death. There is no terrorism to speak of, and visitors are totally safe and extraordinarily welcome. The KRG's economy is booming, based in no small measure on Turkish trade and investment and on the discovery of considerable quantities of oil and gas. Indeed, as Iraq seems to be coming apart at the seams, the third tanker loaded with Kurdish oil departed the Turkish port of Ceyhan, destined for world markets—at least, that is the hope.

The Kurdish authorities have made it clear that they will not come to the aid of the beleaguered Baghdad government of Nuri al-Maliki. Their concern is with the security of the Kurdish people, both inside the KRG [Kurdistan Regional Government] area and outside, including those living in the hitherto disputed territories around Kirkuk and in Diyala province.

Indeed, the peshmerga moved swiftly to take over Kirkuk and other disputed areas, thereby in a single blow denying Iraqi army equipment to the militants, augmenting their own military capabilities, and perhaps resolving the disputed territories issue in just a few hours.

It seems unlikely that they will hand back these territories, which they have long claimed and long been denied. Baghdad's approach had been to stall on the planned census and referendum for Kirkuk, and slow down the de-Arabization of the region that the Kurds rightly insist had been agreed upon. Kurds are arguing that these processes can now be dispensed with. And Baghdad's forces are hardly capable of taking back the territories by force.

Kurdistan is now territorially expanded and has incorporated the rich although badly neglected Kirkuk oilfields. If its energy resources can be fully exploited, both those of Kirkuk and those that have recently been uncovered within the KRG's existing boundaries, Kurdistan could emerge as a very serious energy exporter.

Downstream complexities
However, there are some very complex issues lurking just a little downstream. The Kurds rightly contend that ISIS has only been able to achieve its remarkable battlefield successes because it has served as the spark for a wider Sunni Arab revolt against Maliki's unmistakably sectarian Shia regime.

In fact, the Sunni uprising consists of a dozen or so groups, ranging from tribal forces to former Ba'athist officials and soldiers. Kurds hope that the revolt will somehow produce a Sunni Arab entity, similar to their own, in a federal or indeed confederal lraq.

With Ankara's tacit encouragement, the KRG was seeking to encourage Mosul's now ousted governor, Atheel al-Najafi, along this very path. Given the profound mistrust that now divides Sunni from Shia Arabs in Iraq—in Mosul and elsewhere, Iraq's mostly US-equipped and trained security forces have been primarily used as instruments of Shia exclusion and oppression of the Sunni population—some kind of loose federation is surely the best way forward for this sad country.

But it is not easy to see how we get from here to there. Which kind of Sunni leadership will emerge from the present chaos: an ISIS style regime that would seem unlikely to enter into normal governance and politics with its neighbours and that will be bent on eroding the Iraq-Syria order?; or a Sunni authority derived from either Ba'athist or tribal leaderships that have in the past not been noticeably more well-disposed to Kurdistan's autonomy than have their Shia Arab counterparts.

And how would it survive economically, given that Iraq's oil is concentrated in the Kurdish north and the Shia south?

Furthermore, should the Kurds get their wish and be joined eventually by a similarly autonomous Sunni Arab entity, it would constitute their most immediate neighbor, as indeed is informally the case today as a consequence of the recent fighting. There would be no shortage of potential flashpoints, and there have already been some minor skirmishes between Kurdish and Sunni Arab forces.

Unlike the KRG, which is almost entirely ethnically Kurdish, in acquiring the disputed territories the Kurds have acquired significant Sunni and Shia Arab and Turkmen minorities. There is any number of ethnically mixed villages and towns, and no clear territorial demarcation between Kurds, Sunni (and indeed Shia) Arabs, and Turkmen presents itself.

The Kurds say they are committed to inclusive governance, and the record thus far of Kurd-dominated Kirkuk by and large gives some credence to this assertion. But it is surely not overly pessimistic to anticipate tension between Kurd and Sunni Arab in the months and years to come, almost regardless of the outcome of the current fighting.

And, to exploit the Kirkuk oilfields, the Kurds will have to rely on the goodwill of their Sunni Arab neighbors, through whose territory the pipeline currently passes and who have hitherto been prone to sabotage it, and repeatedly.

External powers
In any case, any re-arrangement of the lands and political system that currently constitute the state of Iraq will be very much subjected to the preferences of external powers—notably Iran, Turkey and the US. Iran has already declared its readiness to defend Iraq's Shia people and religious sites against the Sunni onslaught.

That it has been forced into this situation by Maliki's sectarianism, corruption, power-hunger and incompetence will surely give Tehran pause for thought. It could well be Iran, or Iraqi Shias, who do the deed that removes Maliki from power.

Iraq's Shia militias, and indeed its largely Shia-led army when fighting closer to home, are likely to put up a far better fight as the Sunni groups head south than was the case in Mosul. This is particularly likely should they be reinforced by Iranian Revolutionary Guards in Iraq.

However, whatever Iran's preferences, its intervention is likely to harden the drift—or head-over-heals tumbling—towards a three-part Iraq. In any battle for Baghdad, the Gulf states are likely to increase their already considerable assistance to Iraq's (and Syria's) Sunni militants. Given the Syrian debacle too, a regional sectarian conflagration looks very much in the cards.

Washington's position is more peculiar still. For years it has been unable to appreciate that its support for Maliki is not support for the government of Iraq but for a sectarian Shia faction that has gone out of its way to alienate Sunni Arabs and that has failed to constructively address the country's Kurdish question. Washington's two best friends in the region, Ankara and Erbil, have been vociferously pointing out the errors of the American approach, to no avail. For them, Maliki is the problem, and they have been proved dramatically correct.

Ankara, Erbil and American and other energy firms that have been exploring for oil in Kurdistan long ago concluded that no deal could be struck with Maliki. But they have incurred little more than US wrath and opposition—including to the recent export of piped oil from Kurdistan via Turkey. The US could also now be shaping up to further compound its errors by interpreting the current chaos as generated by ISIS rather than by Iraq's ordinary Sunni population that feels itself abused and oppressed by the US-backed Shia government in Baghdad.

A serious US intervention in Iraq, perhaps consisting of air-strikes and drone attacks, would be compared unfavorably by the region's Sunnis with relative US inaction when confronted with a Sunni uprising in Syria.

Finally, in addition to its immediate task of freeing the 80 or so Turkish hostages held in Iraq, Ankara also has little choice but to engage in the affairs of its troubled neighbor. With Erbil, it would like to see a more federal Iraq emerge from the present mess. It aspires to become a major partner of both Iraq's Kurds and its Sunni Arabs—a good and powerful neighbor to Iraq's northern provinces.

For all the government's denials, Turkey bears at least some responsibility for creating the monster that is ISIS by its readiness to facilitate its activities in Syria, not least in return for ISIS's enthusiasm in taking on Syria's Kurds, who have managed to carve out for themselves three self-governing entities along Turkey's border.

Alarmed by the seriousness of what has happened in Iraq, Ankara is now desperately backpeddling in its approach to Syria's Sunni militants. Turkey will want a moderate Sunni leadership in both Iraq and Syria that it can do business with, and will also be concerned about the fates of Iraq's Turkmen—currently subjected to pressure from Sunni militants in Tal Afar close to the Syrian border, but also now incorporated in significant numbers in Kurdish-ruled Kirkuk.

Above all, Ankara will be obliged to further reconsider its approach to the region’s Kurds. It long ago shed its opposition to greater autonomy for the KRG, and indeed has in effect worked to enhance that autonomy by agreeing to export Kurdish oil. Turkey might now have to revise its position both on the Kurdish acquisition of Kirkuk—which is in any case looking like a fait accompli—and on Syria's Kurds. Kurds are looking like much the best sort of neighbor in this desperate region.

Photo of the Citadel of Erbil by Tom Blackwell via Flickr.