END_OF_DOCUMENT_TOKEN_TO_BE_REPLACED

Toward a progressive position on Syria

On Facebook in recent days, I have been having a spirited exchange regarding Syria with Kevin Zeese of the website Popular Resistance, which we recently had to call out for running de facto Assad regime propaganda, filled with blatantly distorted claims. Zeese is the "Attorney General" in the Green Shadow Cabinet, an entity we called out here and here for similarly serving as a stateside amplifier for regime propaganda. Much of this is recycling media accounts that attempt to excuplate the regime in the Ghouta attack. For instance, Popular Resistance reprints a Guardian story, based on conveniently anonymous sources, "German Intelligence: Assad Did Not Order Chemical Weapons Attack." If you actually read past the headline, the unsourced claim is only that Assad didn't personally order the attack. Another Guardian piece picked up by Popular Resistance speculates that the US finding that Assad was behind the attack may be tainted by Israeli intelligence.

But infinitely worse is a piece entitled "The Hidden History of the Syrian Civil War" by Popular Resistance house writer Harel B. It commits the nearly universal distortion in "anti-war" propaganda of portraying the resistance as entirely jihadist. Here is how the political forces in Syria are broken down in this disingenuous account:

[M]any Syrians support Assad, some very strongly loyal to him and his party; others want reforms but not 'regime change'; and still others want a complete change of government (to be replaced by nothing less than an Islamic caliphate, as desired by the centrally influential Jabhat al-Nusra rebel group, or replaced by something more moderate if other insurgent groups have their choice)

Once again, Syria's secular civil resistance is 100% invisible. Not to mention that the order is neatly reversed, implying that those who support Assad constitute a majority, a very improbable claim. After this, Popular Resistance's attempt to buy legitimacy by running a lone Al Jazeera piece on Syria's "Nonviolent Resistance" seems very transparent indeed—as we have pointed out. The "Hidden History" piece also leads with a photo of placards from the pro-Assad ANSWER Coalition reading "WAR AGAINST SYRIA: BUILT ON A LIE"—necessarily implying that the Ghouta attack is a "lie." This is the same group that organized recent rallies where portraits of Bashar Assad were prominently brandished.

In the interests of trying to clarify a progressive position (not "policy") on Syria, we reprint here some of my Facebook exchange with Zeese. In response to my protests, he insisted that our actual positions were probably not that far apart, and asked if I agreed with the following points:

1. You oppose US military intervention and favor taking [the Ghouta case] to the international court?
2. You support the nonviolent resistance?
3. You agree there is no conclusive proof that Assad ordered the use of chem weapons?

Those are all my positions -- on which, if any, do you disagree?

To which I responded:

First, apart from the merely flawed position you articulate here, my much bigger beef is with the simply MONSTROUS propaganda you have repeatedly run on your website. Which utterly betrays the civil resistance in Syria, and makes your purported support for them so much hypocritical lip service. That said, since you insist on speaking for me, I guess I have to explain (yet again) what is wrong even with your transparently hypocritical position as articulated here…

1. Taking the Syria case to the International Criminal Court is a great idea that I do indeed support, but it will do NOTHING to stop the carnage in Syria. Milosevic wound up at The Hague only after he was deposed. Omar al-Bashir is still happily in power and committing mass murder today, six years after the ICC issued a warrant for him. A similar warrant against Assad will not save a single Syrian life. What are the world's actual responsibilities to the Syrians in this dark hour is a difficult question, but please do not peddle pseudo-solutions.

While I am not stumping for US intervention, and my natural inclination is to support those left-wing currents in the civil resistance that oppose US intervention, I am advocating first and foremost for SUPPORT FOR THE CIVIL RESISTANCE. Not by the US government, but by progressives in the US. And the civil resistance is seeking solidarity, first and foremost, in their struggle against the dictatorship. So all the pro-Assad propaganda (Ghouta was a false flag op, the rebels are all jihadists, etc.) must be VIGOROUSLY OPPOSED.

3. Touting the narrowly accurate claim that there is no "conclusive proof that Assad ordered the use of chem weapons" constitutes support for Assad. First, it assumes a false equivalency of probability that the attack was carried out by the regime or the rebels, when the probability scale is in fact weighted overwhelmingly for the regime's culpability. Second, it makes no difference if "Assad [personally] ordered" the attack. So what if it was ordered by one of his military brass, with the dictator himself kept outside the paper trail for reasons of plausible deniability? This claim is dishonest two different ways, and by repeating it in propagandistic fashion you are making a mockery of your supposed support for the "nonviolent" resistance.

Maybe this can help provide some clarity for a legitimate anti-intervention position, rather than a one-sided "anti-war" stance that loans comfort to the regime by rendering the realities of Syria simply invisible. We have noted some encouraging signs. We reprinted a piece by Syrian activist Mohja Kahf from the website of the pacifist group Fellowship of Reconciliation. We also take heart in a Syria Solidarity Network, attached to the Twin Cities-based Friends for a NonViolent World, which formed in 2011 in response to Assad's repression. But such efforts are few and far between. If anyone knows of any more, please let us know...

At Zeese's request, we provide his response from the Facebook exchange—and my counter-response:

Kevin Zeese I don't disagree with much of what you say. On Assad ordering it, there seems to be a lot of evidence from Israeli and German intelligence that not only did he not order it but Assad actively opposed the use of chemicals, tried to stop their use and when chems were used his commanders freaked out to see what happened. If that is the case than Assad does not need to be taught a lesson. This does not mean I am pro-Assad, but also makes the case for military intervention even weaker.

Even if the resistance changed their view and wanted the US to intervene militarily, I'd oppose it. I see US military intervention as one of the great devils of the world. It really makes the US the great perpetrator of violence, death and destruction; and it is used to force countries into the neoliberal, transnational corporate economy US leaders (corporate and government) insist on. Of course, this and weakening Iran have been the real goals of Syrian intervention, our leaders don't care about chem weapon use as can be seen from their own use and their acceptance of allies using them. So, this is an area where we might disagree -- I oppose the US getting involved militarily, and would prefer the CIA stop with their current involvement.

Bill Weinberg See, there you go again. Evidence Assad tried to stop the Ghouta attack? How did I miss that, watching this as closely as I do? Oh right, because I don't avidly follow Assad-propagandist websites that seize on any speculation from a German or Israeli spy that seems to exculpate their hero. I'm glad you see US military adventures as one of the great devils of the world. If only you saw genocidal dictatorships the same way. I am not speaking for you; I am calling you out on propagating regime propaganda.

He follows by linking to the two Guardian stories referenced in the preamble of the original post. The one about the German intelligence claims does assert, based on its anonymous sources, that Assad "blocked numerous requests from his military commanders to use chemical weapons against regime opponents in recent months." (Which necessarily implies that the regime has considered use of chemical weapons!) And around we go.

The Germans are at it again...

Well, it looks like Germany's intelligence agencies may have reason to be casting the blame for the Ghouta attack elsewhere than Assad. Russia Today reports Sept. 18:

German officials have confirmed that Berlin sent chemicals to Syria that could potentially be used to make sarin gas. The government stressed, however, that it is confident the “dual-use” chemicals were not used for military purposes.

Germany exported more than 100 tons of potential ingredients for the deadly gas between 2002 and 2006.

"The permits [for delivery of the chemicals] were granted after a thorough examination of all potential risks, including the dangers of misuse and redirection with a view to possible use in connection with chemical weapons," Germany’s Ministry of Economy said in a statement responding to a formal request from the socialist Left Party.

The Syrian American Council has issued a  "Letter to the Anti-­‐War Movement" (text on PDF), asserting that "diplomatic attempts to resolve the conflict have been exhausted and consistently failed, as thousands of people are being killed by escalating violence." And: "While based upon good intentions, the anti-­‐war movement today may inadvertently be standing with forces that support a continuation of the conflict in Syria."

A photo of today's march in London, simialr to that held in New York two weeks ago but seemingly bigger, via British Syrians & Friends in Solidarity with the Syrian Revolution... 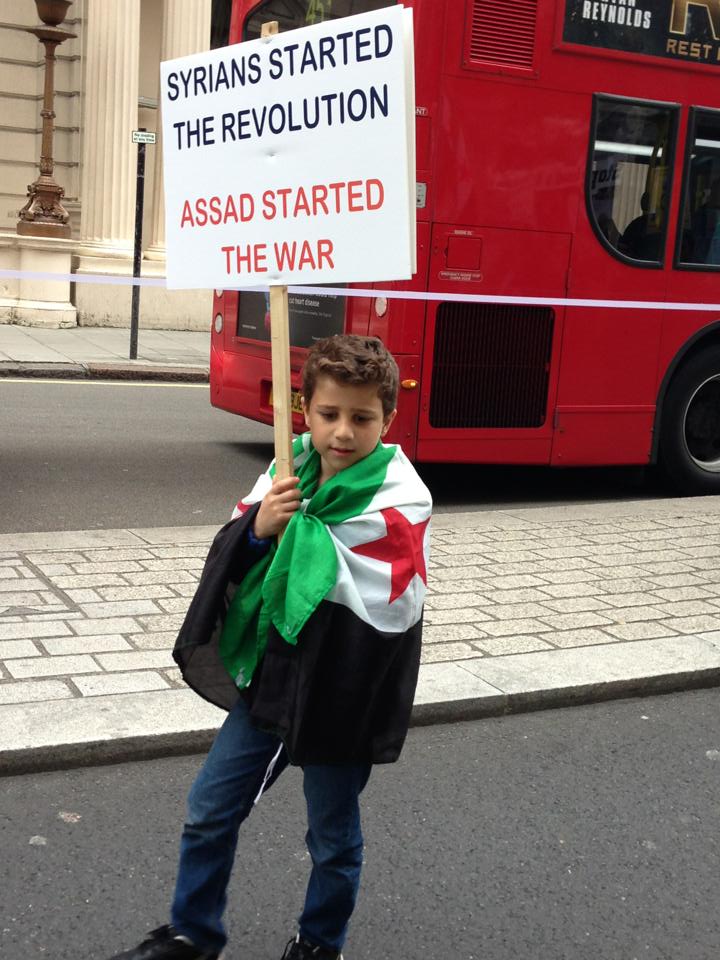 Mohja Kahf, a member of the Syrian Nonviolence Movement, speaks to her Minneapolis audience via Skype on December 29, 2014. she discusses the multiple forces involved in the Syrian quest for peace and justice in their country. Sponsored by Committee in Solidarity with the People of Syria” (CISPOS) and Friends for a NonViolent World. Video online at Vimeo. Long, but absolutely required viewing. Most informative, comprehensive, progressive, passionate and above all clear presentation on Syria I've yet seen. Big shukran, Mohja Kahf.